Please join the Dutra family and their friends at their Annual Fundraiser to celebrate the 18th year of service in support of Bernie’s continuing dream foundation, OneChild. This year’s event will be held at Spin-a-Yarn, 45915 Warm Springs Blvd., from 5:30 – 7:00. Tickets are $60 each and may be purchased in advance, or at the door on the evening of the event.

Thanks to everyone who joined the Dutra family and their friends at their Annual Fundraiser at Spin-a-Yarn, to celebrate the 17th year of service in support of Bernie’s continuing dream foundation, OneChild. 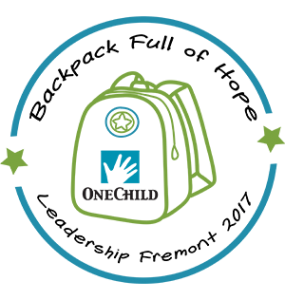 Leadership Fremont, a nine-month program of the Fremont Chamber of Commerce, develops local leaders with the skills and network to address community needs today and in the future. The Service Project provides participants with the opportunity to plan, organize, and execute a project engaging and enhancing our community.

The 2017 Leadership Fremont class chose OneChild as their recipient. Their goal was to increase OneChild’s reach by over 25% in 2017, outfitting 125 additional children from the Tri-City area. They exceeded their project goal and raised funds through their “Backpack Full of Hope” event to serve an additional 200+ children in need. THANK YOU to all who supported this event! Special Thanks to the 2017 Leadership Fremont class, who chose OneChild as their recipient.

The Dutra family and their many friends celebrated the 16th year of service in support of Bernie’s continuing dream foundation, OneChild. This year’s event was held at Spin-a-Yarn.

In this season of giving, the Alameda County Office of Education (ACOE) partnered with local East Bay charity, OneChild, to gather warm coats for children in Alameda County. Led by the vision of Alameda County Board of Education President Eileen McDonald and Alameda County Superintendent of Schools L. Karen Monroe, ACOE staff collected brand new coats to be donated to youth in kindergarten through twelfth grades.

Board President Eileen McDonald initially suggested that ACOE partner with OneChild. She stated, “I love the mission of OneChild to support Alameda County families by focusing on building self-worth and self-esteem. Having a new coat to call your own can have a big impact on a child emotionally and physically and I am just thrilled to have helped raise awareness and support for families in need this holiday season.”

OneChild is a non-profit organization dedicated to providing disadvantaged youth with new clothing and school supplies. The main goal of the organization is to promote self-esteem in underprivileged children so that they may appreciate their individual worth. The family-run organization was the vision of matriarch Bernadine Dutra, who, having grown up in poverty, was teased as a child for wearing used clothing. She created OneChild with the goal of offering families dignity in receiving donations by providing them with individualized shopping sessions for brand new items at the OneChild store, in order to prevent children and families from enduring the humiliation she felt as a child. OneChild began in Fremont and now serves families throughout the Bay Area.

Superintendent Monroe commented, “We were excited to have ACOE staff involved in this effort. The coats donated will help students in need, while the message of supporting a child’s self-esteem with fundamental items has further inspired our staff in their daily commitment to Alameda County’s children.” 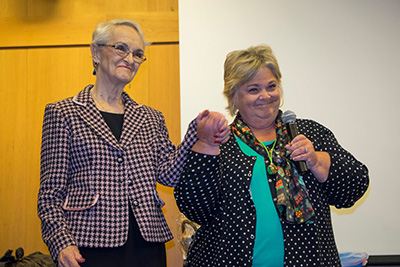 Thanks to everyone who joined us for a Fun-filled Evening featuring:

We are so grateful that over $15,000 was raised on our behalf! Special thanks to committee members:

The Dutra family and their many friends celebrated the 15th year of service in support of Bernie’s continuing dream foundation, OneChild. This year’s event was held at Spin-a-Yarn.

May 9, 2015 – OneChild was the recipient of donations from DRYCO Construction’s annual “Hike for Mankind.”

In March 2015, OneChild was honored to participate in The Despeaux Good Works Fund at the East Bay Community Foundation. The grant was to be matched on a 1-to-1 basis, up to $5000. With the tremendous support of OneChild donors, we were able to raise $5000 and have our donations matched.

In October 2014, OneChild was awarded a grant of $10,000 from the Boris and Vera Bogart Foundation. These funds allowed the purchase of backpacks, books and new clothing for children to shop at OneChild. Boris & Vera established this foundation to help make a positive influence in the lives of under-served youth, and this donation will make a huge difference in many lives

The Dutra family and their many friends celebrated the 13th year of service in support of Bernie’s continuing dream foundation, OneChild. This year’s event was held at Spin-a-Yarn.

On May 11, 2013, DRYCO Construction, Inc. hosted a hike to the top of Mission Peak to raise funds for OneChild. It was a beautiful day and the 49 hikers that made the trek up the mountain are each having NEW backpacks dontaed to ONeChild on their behalf. After finishing, the hikers headed back to DRYCO headquarters and met up with others for a post-hike barbeque. All of those that participated in the barbeque are having $25 Payless Shoes gift cards donated on their behalf. All in all, close to $2500 in goods and gift cards were raised for OneChild! 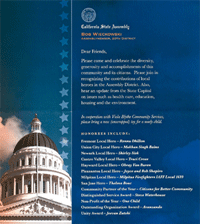 One Child was honored to be named the recipient of the Non-Profit of the Year award, presented as part of the awards ceremony recognizing contributions of local heroes of the 20th Assembly District.

The awards ceremony was held on December 15, 2011 at James Logan High School, in Union City.

Santa Clara, Calif. – The San Francisco 49ers announced that Bernadine Dutra, founder and president of OneChild, is the winner of the 2008 49ers Community Quarterback Award. In honor of her contributions to the community, NFL Charities presented a $10,000 grant to Dutra at a team luncheon in San Mateo, hosted by former 49ers quarterback Steve Bono.

Recognition of Bernie Dutra and OneChild’s efforts include: